According to Wikipedia, the Thormanbys were named for a horse in the Epsom Derby in 1860. The name was bestowed by Captain George Richards, who helmed the prosaically named ship the Plumper, after betting on Thormanby to win. (Other area names hearkening back to that famous race are Epsom Point, Derby Point, and the beautifully named marine hazard on South Thormanby, the Tattenham Ledge.) 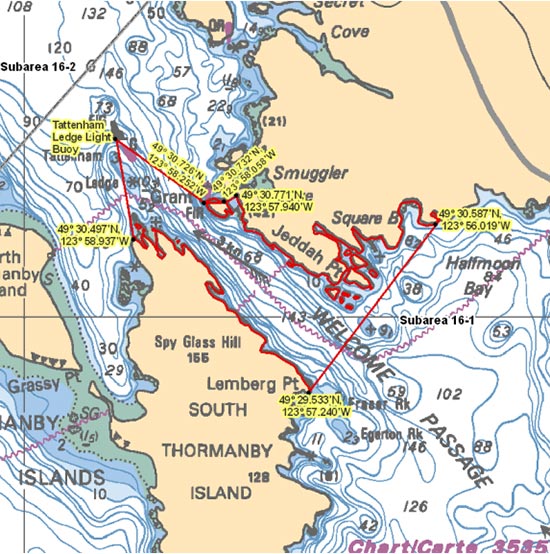 Non-First Nations settlement of the Thormanby Islands dates back to 1905 when Jack Vaughan built a cabin and wharf on North Thormanby, beginning a long history of summer vacationing. A resort once graced this part of the island but now accommodation is limited to private cottage ownership, mostly around Vaucroft beach, where the water taxi lands to this day. The old Union Steamships once made this a regular stop on their routes north.

The park most well-known on Thormanby Island is Buccaneer Bay Provincial Park. This is a no-fee, self-registration camping area with five sites (one party per site and all must be north of the gap) that are available on a first-come first-served basis. The park is accessed via water taxi, private vessel, or kayak - kayakers should be wary of large wakes created by boats moving through Welcome Passage in both directions and plan accordingly.

On South Thormanby, private land ownership encompasses most of the northern end, and these homeowners value their privacy so trespassing is not recommended. The only access to the 46-hectare Simson Provincial Park is via private vessel or chartered water taxi. This park carries its name from the family of original settler Calvert Simson; the family donated it as a park and it is directly across from Halfmoon Bay.

RSS Feed
Contact us:
5571 Nickerson Road
Sechelt BC Canada V0N 3A7
by appointment only
604-885-5913
Advertising/Content
Site Feedback
Have a Question?
Report a Problem
Login to edit your Listing